Hello and welcome to Chapter 2 of The Biodynamic Farming Experience for the Celestially-Challenged. It is a partly-formed, poorly-articulated and over-hyphenated chronical of a particular journey, which is not quite the right word because it suggests the presence of a destination which is not at all guaranteed. Whatever it is, a woman-farmer-of-a-certain-age-and-experience (me) delves into the theory and more-importantly the practice of Biodynamic farming in search of fun (frankly) and future of farming (idealistically).

Journey is clearly not the right word. Voyage of discovery? Too fancy. Is it a process? Nope. No fun. Compost heap. I think it might be a compost heap. Perfect. Piling up all kinds of ideas, layering them with experience, mixing up some theories, letting it sit. For absolute certain, something good is going to come of it, but it might take a while, depending on how raw the material is.

The bottom layer in my compost pile of cosmic cognitive sentience (how about that!) is a cover-to-cover reading of the original Biodynamic lectures delivered by Dr. Rudolph Steiner. I am just about done. I remain perplexed most of the time, although I experience (sadly random and rare) flashes of triumph when I realize I have managed to grasp a concept or follow an argument- very quickly snuffed out, usually by the next paragraph. I persist, however, because I am hooked.

In the last article I mentioned the Biodynamic Preparation 500, which we have been using for years. It is widely considered to be the most basic and simple preparation. It’s easy to make. You just stuff a cow horn full of fresh manure and bury it a foot or two down in the soil for the winter. In the spring, when dug up, the manure has transformed into a delightfully hummus-y loamy, dark, rich, almost powdery substance which is incorporated into water and sprinkled about the fields and gardens. Steiner manages to explain why the use of a cow horn is necessary, but I can’t. The point though, is to avail the farm to the powerful forces of the universe.

Well the thing of it is, it also works on people. If you are not picking yourself up off the floor after collapsing in a dead faint of amazement, then I have not expressed myself well. Which is a problem with the writing, not with Biodynamics. You see, I myself have been made available to believe that the universe has an influence on the health of my farm because I have been using the Biodynamic Preparation 500.

It’s taken close to twenty years of using the preparation for me to get to this stage. I hope it doesn’t take everyone else that long. Steiner seemed to think about 4 years should do it.

To return to the point of this exercise: is Biodynamics fun? Is it the future of farming? I remain firm in my conviction that it might be. It is certainly more fun than the organic certification process, which I find has gotten a little dry. Necessary, if we are keen to relieve the Monsantos and DuPonts of the world their self-appointed mantle of agriculture way-finders. Obligatory, if you want to sell directly to people who don’t want to consume products from those companies. It is not, however, fun. Not that it needs to be, of course. That obviously does not come into it. It’s just that I find myself less and less satisfied with the result: a mere certificate.

With Biodynamics, I seem to be ending up with a lot more than that. I have inspiration, wonder, amazement, incredulity, reality-checks, positive feedback from customers, tantalizing experiences of powerful forces. Lovely things to add to the compost heap of galactic oomph. I think I am going to be a better farmer because of it. Certainly, the farm is a better farm because of it.

Returning to the question of looking into the future of farming. It does seem to me that farmers and consumers alike are aware that the organic certification program can only take us so far. There needs to be something that speaks to the fact that many farmers are going way beyond what is necessary to get the organic certificate. They are doing so because it becomes clear after a few years of organic farming, that the soil needs a little something more to gain health.

While I think it is reasonable to look at Biodynamics to take it to the next level, there may be some snags. One of them has got to be that it can get a little bogged down in discussion, which I would like to flag as one of the biggest hinderances to productivity. A talking farmer is very often not a working farmer.

Another issue is this insistence on involving the position of the sun and the moon in relation to the stars and planets. People like me are simply going to switch off when this topic arises. I believe that this aspect of Biodynamics is the stumbling block for most would-be practitioners. There is precious little science to back up the practices and very little apology is made for this.

Cynically, I would also suggest the fact that Biodynamic farming does not require much in the way of support industries would really sink it as a viable farming method for the future. Apart from the odd tractor, a few implements and some cover-crop seed, Biodynamic farmers spend very little in the mainstream agricultural system. There is simply no need.

So, as far as the future goes, Biodynamic farming is hazardously non-productive, off-putting, un-scientific and doesn’t contribute to the world’s largest companies. Doesn’t sound very promising does it.

On the plus side, our yields are increasing, our customers are asking for it, and it is a fun way to farm. I think if we all just started throwing a little Biodynamic 500 around and carried on with our business, it would be a good start. 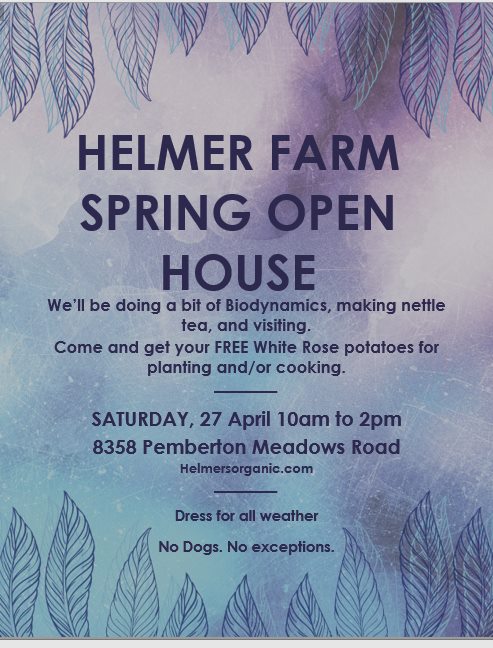