I grew up in rural Ontario, and every New Years Eve my family and I would drive 3 miles down our snowed-in gravel road to the farm of Joanne Cowling. Having come to Canada from England many years earlier, Joanne kept her meticulous British accent and a series of beautifully maintained gardens, complete with goats, sheep, pigs, geese, ‘chooks’ (chickens) and a pony named Sandman. Upon entering the red brick farm house my brother and I would remove our winter clothes and make a beeline for the kitchen where Joanne would ladle out a hand-thrown clay goblet of homemade egg nog for each of us. As I sipped its heady creamy goodness, I always wondered what made the adults laugh so loud as they drank theirs. (I suppose I did not see the brandy making its way from goblet to goblet, how conversation slipped more easily in its presence). Then my brother and I would weave between the legs of neighbours to get to the large table that was laid out with hundreds of Joanne’s famous hors d’ourves: crab wrapped in filo pastry, thin slices of marinated beef tongue, smoked salmon sprinkled with capers, warm brie cheese, and Christmas cookies cut into the shapes of animals, decorated with fancy icing and tiny silver balls. But in the collage of these most delicious morsels, it is the egg nog that I remember most; that rich impossible creaminess.
About 10 years ago, through a series of arm wrestles, afternoon coffees, and barn chore trades, my mom finally convinced Joanne to write her recipe down, and the ‘nog became part of our family tradition. Every year when I go home for Christmas there is the requisite jug of thick, creamy (and quite boozy) ‘nog chilling in a snowdrift outside the back door.
Over the years I’ve sampled many attempts at the enigma that is egg nog. And I have to tell you that nothing, and I mean NOTHING has come close to the velvety indulgence of this homemade ‘nog. It takes a little bit of time and effort, a little bit of coaxing and folding and stirring and chilling. But the results are worth it: a rich, milkshake-thick ‘nog, meant to be sipped, savoured, and shared- or stirred into your morning coffee.

Recently, concern had been expressed over the consumption of raw eggs (which are essential to traditional egg nog’s frothy texture) because of the possibility of exposure to Salmonella bacteria.
The Canadian Food Inspection Agency states that “Although Salmonella is rarely found in eggs in Canada… foods made from raw or lightly cooked eggs may be harmful to vulnerable people such as young children, the elderly, pregnant women and people with weak immune systems.” (A study conducted by the USDA in 2002 showed that only one in every 30,000 eggs in the national food system was contaminated with Salmonella bacteria).
In quest of an opinion closer to home, I visited Trout Lake farmers market and talked to vendors selling local eggs. “An egg is an egg.” One farmer told me. “I’m a big believer in cooked food. But I’ve got a friend who gulps them down raw all the time, and never seems to have a problem.”
“The big thing is to know your farmer” another told me, restating the mantra of the local food movement. “You want to know that the flock has no history of salmonella, and that the eggs have been properly washed and stored.” Eggshells themselves form a hermetic seal, which means they are impervious to contamination once they have been laid, unless the shell has been cracked or compromised. So when sourcing eggs for this recipe, choose ones with shells that are clean, uniform, and unbroken, that have been refrigerated as soon as possible after laying, and that are not past the best before date. (If 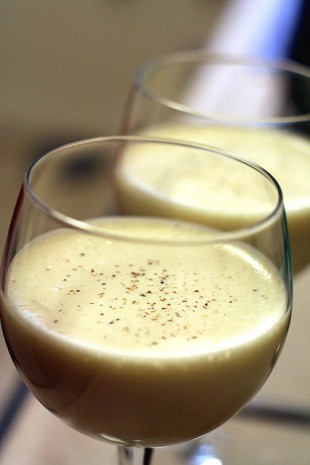 you’ve bought undated eggs from a local farmer, use them 3-4 weeks after purchasing, and don’t be afraid to ask if he or she ever eats them raw.) If you want to be extra cautious you can always buy cartons of pasteurized egg yolks and whites from any large grocery store. I personally prefer the full-bodied taste of eggs from organic free-run hens, and believe that chickens who’ve had a chance to scratch in the dirt and get splashed with the occasional raindrop lay healthier, more nutrient-rich eggs. I also like knowing the name of the person who hands me my carton, rather than selecting one from the cold glare of a supermarket display case.                         Whichever source of eggs you choose, after you’ve whipped, mixed and folded a batch of this incredible egg nog into being, take a moment to send a few thoughts to the chickens that have made all of this possible. Then take a sip. Let the holidays begin!

I find it easiest to separate eggs by cracking the whole egg into the palm of a clean hand, and then letting the white drain out between my fingers. You can also use an egg separating tool, or pour the yolk from shell to shell until all the white has drained away. Be careful not to get any yolk in with the whites, or they will not whip as well.

If you wish to make a non-alcoholic ‘nog, substitute 1 ½ cups whole milk and 1 tsp vanilla in place of the brandy or rum.

Put a bowl in the freezer to chill for making the whipped cream.

Whip the yolks together with the sugar using an electric mixer until they are light in colour and a consistency similar to buttercream.

Add the alcohol a little at a time, mixing all the while. Continue to mix until all the sugar has lost its granular texture.

Whip the cream in the bowl that has cooled in the freezer until it is stiff. Gently fold it into the ‘nog along with the grated nutmeg.

Store in the freezer for a milkshake-like consistency, as the alcohol will keep the ‘nog from freezing. Or keep refrigerated. Either way, the ‘nog is better if allowed a few hours for the flavours to mingle. Stir before pouring, and grate additional nutmeg over the top of each glass before serving. Enjoy!

*Author’s note: this article originally appeared in Edible Vancouver’s Winter 2011 issue, but as the online edition is no longer available in its entirety, I though it was worth a repost. 🙂