There’s a Facebook meme that has caught my eye – moms asking their kids questions about the mom, gleaning a pint-sized reflection back at themselves. Of course, I wanted to try it and see if I could elicit wry, wise, candid or hilarious insights from my 4 year old. But he wouldn’t play along. He has inherited an aversion to anything overly contrived or calculated from his dad, so shut me down immediately.

“Hey, I have a question for you. What is one thing I say to you often?”

“I don’t want to answer your questions right now,” he advised.

So much for a little bit of insight on how I’m holding up on the job.

Then one day, while Grandpa was staying with us, Kidlet came home from town and announced: “I got you a surprise.”

Not for my birthday or any kind of occasion. Nothing that smacks of contrivance, or expectation. Just random and spontaneous.

Over the course of Grandpa’s 12 week stay, this happened four times.

The first, the surprise was a peppermint Ritter’s bar. I’d bought one earlier that winter, and put it in my pocket for skiing. I shared a square with him, and I guess that made an impression.

A few weeks later, he gave me a bottle of cherry red nail varnish. Way louder and more, um, red, than I would have chosen, if I were to ever choose to paint my nails. And yet, there it was, oozing wth genuine intention and sweetness. He painted both our feet the next day.

The next time that Grandpa was catering dinner, he offered that they had a special dessert. Callan had picked it. “It was all him,” shrugged Grandpa. Peppermint choc chip ice-cream. My favourite! My husband hates peppermint, so we never select this. Never. But once, when I took Callan to the gelato place in Squamish, two years ago, that’s what I got, and I shared with him. And he remembered, and told Grandpa that’s what he wanted to pick.

“That’s my very favourite flavour,” I told him, when it was pulled out of the freezer.

At the very end of February, the last gift came. Just before Grandpa, his best co-conspirator, returned home and he was back to going shopping with people who did not indulge his whims and wants.

And he offered me a bag. And inside the bag was a pack of jiffy pots, for starting seeds.

And I was gobsmacked.

Four years I’ve spent floundering in the garden, trying to push aside my desire for things to be neater, more orderly, more productive. Just breathing when he crawled around in the dirt, getting completely filthy. When he ate the soil. Just breathing when as a toddler, he pulled out all the little white stakes neatly labelled with what had been planted. Or when he carefully planted the seeds all in a pile on top of each other. When as a three year old, he ate my first precious strawberries before they had a chance to ripen and then spat them out, “not ready” (yeah, I could have told you that), or when he stomped through the middle of the garden and squished a few seedlings just as they were getting started. I would breathe and say to myself, this is a place for fun. This is not a place for stress. Let him have fun. Let him learn. Let the garden be chaotic and messy and full of squished plants and failures. And love. Most of all love.

And here he was, at the onset of spring, bringing me pots to get our seeds started in.

“Are you heartbroken?” he asked, at my sudden quiet.

“Well, heartbroken means you’re so sad that you’re heart breaks. I’m kind of the opposite. My heart is overflowing.”

“No babe, it really isn’t. My heart is very happy.” 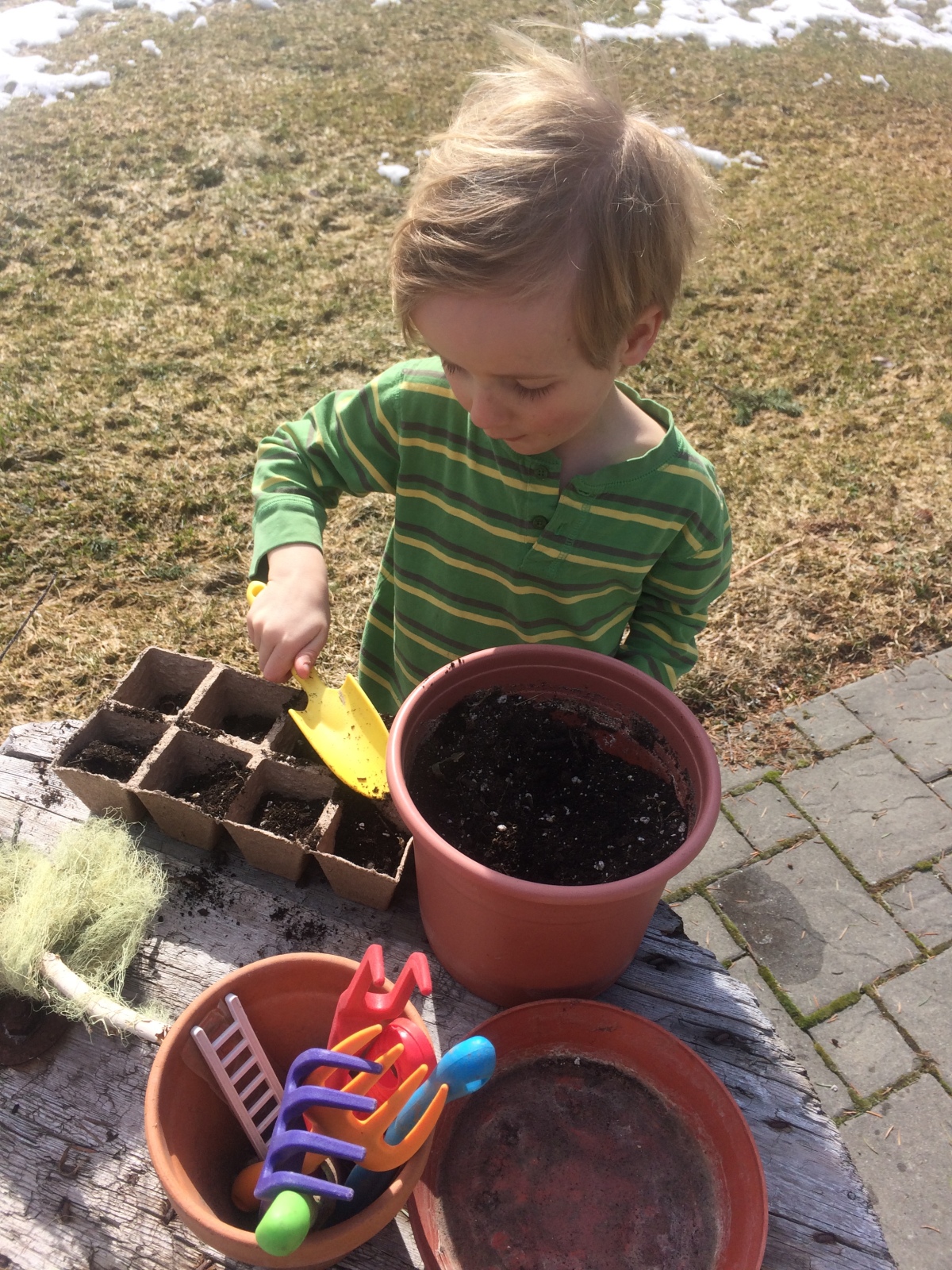 All the time I’ve been wasting in the garden, letting him play and enjoy it and not worrying about whether it’s productive or not, has actually turned out to be quite productive after all.

I have a collaborator. A co-creator. A fellow grower. A little nurturer.

(He also, lest this seem like a portrait of a perfect life, is obsessed with weapons, taught the 4 year old neighbour her first curse-word – “fucker head” – was so silly at karate last night that the entire group was disrupted and I apologized to sempai three times, and is really yet to master the art of saying sorry. Works in progress we are. And yet…)

I couldn’t be more heart-full. And grateful. For what is growing out of the mess and chaos and cycling seasons of our life.