Sammy is 12 but is in great health and a complete love-bug, the woman who is fostering him told me when I called her. He’s an absolute sweetheart who loves kids and wants to be part of whatever is going on. It seemed as if all I had to do was fill out the required forms and then- as if I was some electronic far-reaching cupid- Sammy and Vinnie would live happily ever after. What I want is beside from the point. At least it’s almost spring, so the strict embargo I have been living under- “NO MORE ANIMALS UNTIL SPRING!!” is almost lifted anyways.

So I filled out the application, talked to Sammy’s foster mom, then followed up with the rescue organization when I didn’t hear back from them the next day. “We’ve actually received a stack of adoption applications” the woman told me. “We’re just going through them now.”

I hung up the phone, and put away my ever pressing anxiety that I WAS NOT DOING ENOUGH TO MAKE THIS DOG APPEAR RIGHT NOW!! And told myself that was it; it was now up to the Universe, or God, or whoever it is that makes these sorts of decisions. The real decisions. Like if my sheep will finally get a dog of his very own. 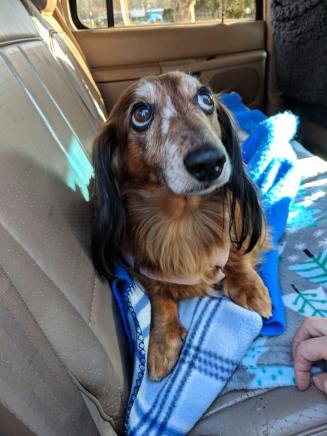 Vinnie. ‘Oh where, oh where oh where might my little dog be?’

But then yesterday, Vinnie pogo-sticked up to my car as I was leaving for work with an excitement usually reserved only for DOGS! and these words appeared on the screen of my mind:

I tried to tune into Sammy but the signal of him had kind of gotten lost, as if my application was sitting under a pile of papers somewhere, or as if there was something important I had left out. Or as if it really WAS out of my hands and that somewhere down there in Surrey the fate of this dog was being decided without me. I actually intended to write this post about something else entirely. But Vinnie BOUNCED onto the screen of my mind and wanted me to tell you HIS story so I shut up and listened.

I found Vinnie on Facebook. An amazing woman named Katie Cowley raised him when his mom rejected him and his brother, and he had a difficult time of it- even more difficult than most bottle babies. He had a really hard time learning how to drink from a bottle and perform other simple sheep-y tasks, like eat grass or make friends. This caused him to be rejected by the flock and instead his companions were dogs. Then his brother died, which caused further alienation. So Vinnie grew up into what my sheep rancher friend Nikki calls a ‘Shog’- an animal with the body of a sheep but the consciousness of a dog. A bit of a misfit. A reject, some might say. To me this makes him special… and perfect.

When Katie moved from the farm where Vinnie was born to Squamish, she needed a new home for Vinnie. I had just moved to Pemberton with my teaching business Mountain Horse School, and I found Katie’s post for Vinnie on Facebook. (The REAL online dating site for all of us weirdo rural animal matchmakers). I have a very unique collection of animals- whom I call my teaching posse- and together we run kids’ day camps and classes and events and offer relationship based riding lessons and animal/nature/horse based therapy for those with autism, ADHD and other neurodiversities. We even host workshops, classes and sessions for adults too!

I collect animals with unique stories and experiences that make them especially open to encounters with humans. They are all calm and very grounded, with especially sweet and curious natures- which makes them incredible medicine for someone who is anxious or traumatized, or who wants to savour the feeling of a relationship with a being who offers love more simply and more readily than a human. Often my animals find their way to me via extraordinary means, and when I saw Katie’s post about Vinnie (then unfairly but perhaps accurately called Dumbo) something in me went DING DING DING!! And I knew I would be getting this little sheep.

Part of my role as lead human in my posse is doing my best to keep each critter not only safe and fed, but happy and fulfilled. I could see that Vinnie was sorely missing having a dog in his life, and not just any dog; a dog that understood him. A dog that could play his game of slow motion virtual head-butting, and fill his dog-deficient neural pathways with bright and shiny love. So if such a dog ‘just happened’ to appear in my Facebook newsfeed, I must do my due diligence as keeper of the posse’s internal and external happiness to make sure this dog arrived at the farm. Right?? Even if such an animal would need to live inside the house with me. (Who am I kidding? My dog-deficient neural pathways could use a dose of bright and shiny love, too.)

Writers note: Between the time I wrote the text of this piece and the time I got into town to post it (crappy internet being a side effect of rural living) I received a text from the rescue saying that my farm ‘sounds like the ideal environment for a dog like Sammy’ and I should hear back from the woman who is to do the site visit in the next couple of days. So there are a few more hoops to jump through, but it looks like Vinnie is close to getting his DOG!! I will keep you posted. 🙂